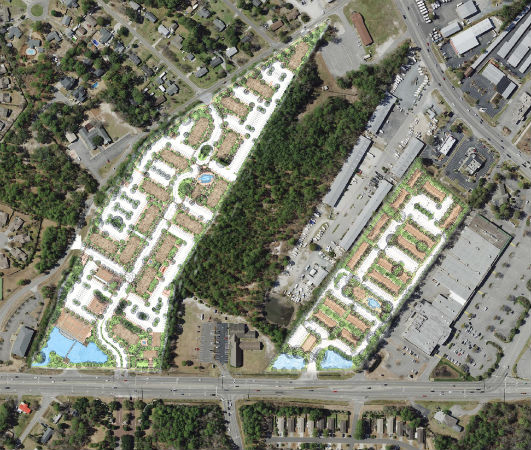 According to an article by Cece Nunn from the Greater Wilmington Business Journal:

“A Wilmington-based real estate development firm is proposing two mixed-use communities that will include affordable apartments, townhomes and commercial space on Military Cutoff Road, according to a news release.

Tribute Companies has submitted conditional district rezoning requests to the city of Wilmington for projects not far from each other on Military Cutoff called Arboretum West, which would include parcels on Station Road and West Westwood Drive, and Arboretum Village at 294 Military Cutoff Road.

The plans include 360 apartments, 98 townhomes, boutique retail, fine dining, office space and a coffee shop, according to a letter from Mark Maynard Sr., president and CEO of Tribute Companies.”

According to the article, there have now been a total of four major mixed-use proposals on Military Cutoff Road so far this year. The other two proposals are The Avenue by The Carroll Companies and CenterPoint by Swain & Associates.

According to Brian Chambers, the associate planner for the city of Wilmington, the two new proposals will be reviewed by the Wilmington Planning Commission on January 3.

The CRESS Group represented the Tribute Companies as Buyer Agents in the off market acquisition of two of the parcels (Wheel Estates I and Wheel Estates II) referenced in the proposed development. The CRESS Group is thrilled to have been a part of the initial real estate acquisition of the project, and we are looking forward to what this community will bring to the Wilmington area.

For more details about the Arboretum West and Arboretum Village mixed-use proposals, please read the full article on WilmingtonBiz.com. Also, for more information regarding the Tribute companies, visit their website at www.tributecompanies.com.